The Pop-up Studios are Coming Soon! 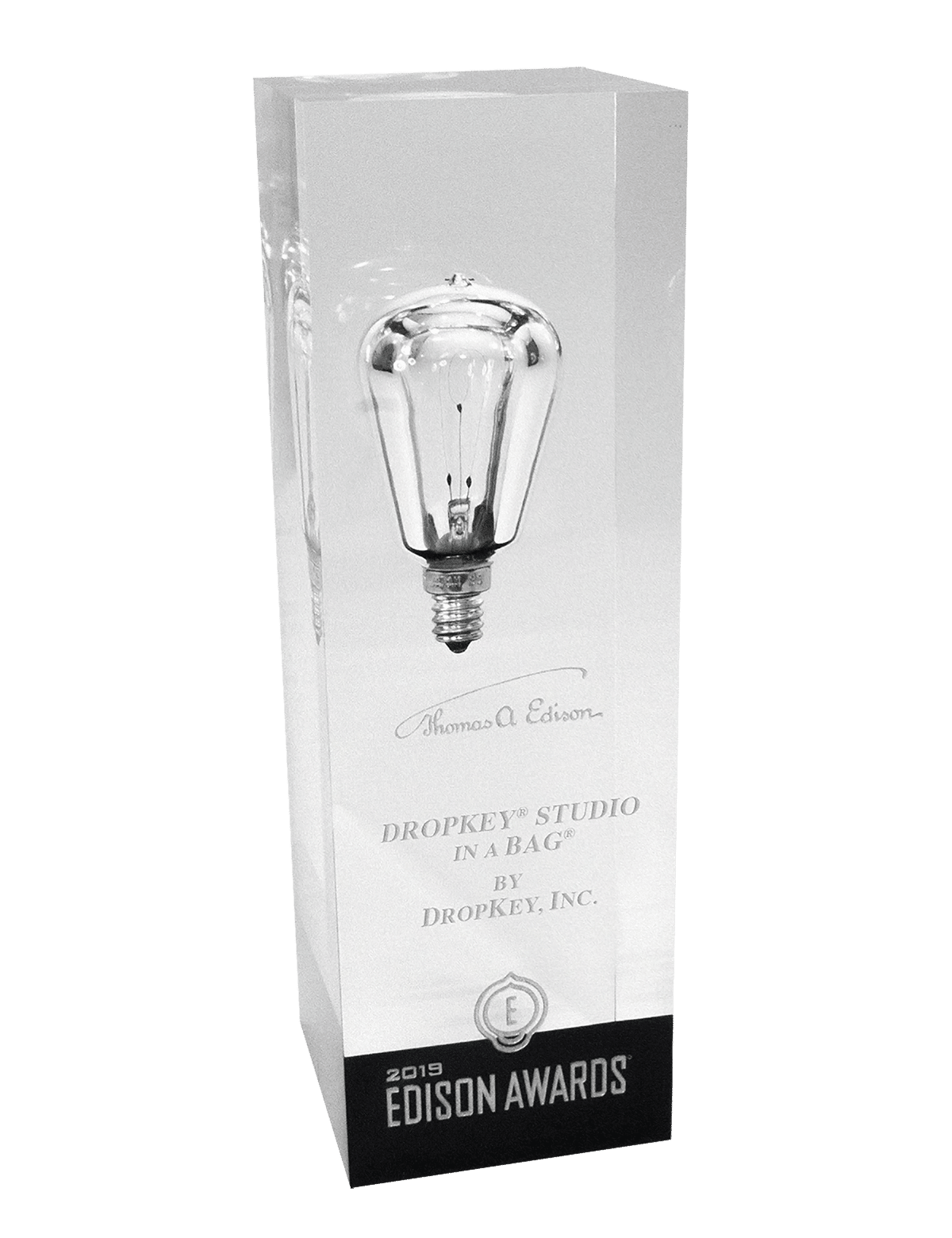 The Be Anywhere® App!

Talk with our Sales Team

Pair the DropKey Camera App with the inflatable child-safe DropKey Studio in a Bag and shoot perfect, live, HD chroma key background replacement on your smart device…just take it with you…and Be Anywhere®!

Soon you can purchase your Pop-up Studio in a Bag Professional or Basic version at our kickstarter event in December 2020—and get a year of free, curated searchable b-roll video clips in our library at MediaBook.tv®!

Access your own high-quality, curated background video and photo library on the MediaBook.tv® Cloud to replace your monochromatic background…and be anywhere!

Kids and Pros can produce inexpensive high-quality HD background replacement videos at home or on the road with their iPhones and iPads. Anyone can be a Daily Show correspondent or SNL character in HD with a DropKey Pop-up Studio In A Bag and an iPhone.

DropKey® has Consumerized Chroma key on smart devices with the new DropKey Social Camera App and the child-safe inflatable Studio In A Bag®, developed by DropKey founder and engineer Rockwell Scharer with Richard Mall, the Academy Award-winning Key Grip for the blockbuster films Avatar and Iron Man II-III.

Nov 5, 2020, (Santa Monica, CA) TDN, PRWeb – DropKey, inc and Mediabook.tv has launched its innovative, inflatable DropKey Pop-up Studio in a Bag, the inflatable phenomenon that is set to overtake the Youtube Creator world by establishing a foothold in the turnkey personal media studio marketplace as the go-to broadcast quality camera app, making millions of video clips available for b-roll backgrounds that enables  Creators to shoot videos with bright lights and to “be anywhere” they want. The multiple line of products being launched soon are the inflatable Pop-up Studio in a Bag (Basic and Pro version), the camera app, the DropKey robotic single-user DeskBot and the inexpensive DeskTop using the Cambot tripod with dual key lights, the first robotic personal media studio system with pro audio to hit the market.

In a public but invite-only kickstart campaign launched for StudioNow.com and DropKey Creators on Oct 25th, the Academy, Emmy and Edison-Award winning team plans to launch their line of products soon with a robust licensing revenue model for Reality Show Producers to access talent through the cloud. Producers of American Idol, NBC’s The Voice and AGT can obtain HD auditions using the DropKey cloud to offer professionally shot backgrounds so smart device users all over the world can engage in making television content. https://dropkey.com/shop – PRWeb.

Santa Monica, CA – Apr. 7, 2019 – Inventor and DropKey® Founder Rockwell Scharer has received an Edison Award for Best Digital Product Innovation at the 2019 Edison Awards in New York City at the New York Academy of Arts and Sciences. The Award, named after Thomas Alva Edison, recognizes and honors the world’s best of the best innovators and innovations.

Mr. Scharer was nominated for the prize in late 2018 for his work in developing MediaBook® and DropKey® Studio in a Bag® technology, creating the Mobile Content Creation (MCC) market. The pop-up airframe prototype required years to develop with an Academy and Emmy Award-winning team.

DropKey is a Consumer-friendly Chroma key background replacement app with video file storage and assembly in the cloud, the state of the art live green-screen tech on smartphones.

Founder and CEO Rockwell Scharer solved a difficult physics problem to invent a pop-up, inflatable studio with bright lights and portability to make push-button perfect live background replacement on smart devices with no rotoscoping or post-production. 85% of what you see on television is made using green-screen technology. 100% of professional content creators use Chroma key background replacement in their productions, and when you put that ability, for the first time, on 2 billion smart devices, you have a revolution. Now amateurs and pros can purchase DreamScreens with the DropKey app and can have the Daily Show set in their second bedroom from $599 for the consumer version available in 2021, or the Pro available now for $1499.

The DropKey app, when paired with the new DropKey Studio In A Bag produces crisp, HD live background replacement on smartphones without rotoscoping or post-production required. Our founder invented the pop-up Studio-In-A-Bag with brilliant lights, wireless earbud mics, and is collapsible and flight-ready with no free-standing lights, no post-production and no lighting decisions to make.

According to Rockwell Scharer, CEO of DropKey, Inc., “We saw a very big niche in content creation where content producers can significantly increase their revenue streams on the mobile platform. Users will be able to make Lord of The Rings at home using professionally shot backgrounds and purchased on Mediabook.tv, Steven Spielberg and J.J. Abrams will find proteges and farm talent across the globe, and Online News broadcasting will change forever as we know it.

DropKey – the Be Anywhere App! is paired with the DropKey Studio in a Bag and is a Consumer-friendly Chroma key background replacement app with large video file storage and post-production assembly in the cloud, the state-of-the-art green screen tech on smartphones. For more information, please contact us here in the form below or at info@dropkey.com.

DropKey inflates in one minute, and you’re shooting in 10!

The Voice Studio App in development – The DropKey “Be Anywhere” App automatically creates headers and trailers to compile a slick clip to share broadcast quality auditions and win a spot on the hit show! (Clip courtesy NBC/Universal/SNL).

Thanks to Peter VLahos we have background replacement, a valuable tool that has now been Consumerized for the first time in history with DropKey, the push-button perfect Chroma key Camera App paired with the DropKey Studio In A Bag.

The Voice Studio App in development – The DropKey “Be Anywhere” App automatically creates headers and trailers to compile a slick clip to share broadcast quality auditions and win a spot on the hit show! (Clip courtesy NBC/Universal/SNL).

With the DropKey Studio In A Bag paired with the DropKey App, anyone can make fun videos like Dave Letterman’s Holiday card…right from home on your smart device.

Sunday Morning pundits will all be able to stay home with DropKey Studio in a Bag technology. No more early morning trips across the Beltway to go in to the network studio when live, nearly zero-latency perfect Chroma key can be used to do interviews on news shows. The Facebook Live App will pair seamlessly with the DropKey Studio in a Bag so your favorite influencers can broadcast from anywhere in the world on the Facebook Timeline, Instagram TV or wherever you want!

Kids can download the DropKey App and pair it via WiFi with the DropKey Studio In a Bag and learn the power of easy “push-button perfect” background replacement for as little as $100!  JJ Abrams and Bad Robot can License our app to make Star Trek Apps so you can make videos with Star Trek B-roll!

The above are current or past clients of DropKey, Inc. They do not necessarily endorse DropKey or its products or services.

The DropKey Studio In A Bag will be marketed to Consumers, Schools and Professionals from $599 to $1599 at DROPKEY.COM and TVSTUDIOINABAG.COM

The DropKey App paired with the inflatable DropKey Studio in a Bag is a Consumer-friendly Chroma key background replacement app with large video file storage and post-production assembly services in the cloud, the state-of-the-art green screen tech on smartphones.

Any cookies that may not be particularly necessary for the website to function and is used specifically to collect user personal data via analytics, ads, other embedded contents are termed as non-necessary cookies. It is mandatory to procure user consent prior to running these cookies on your website.